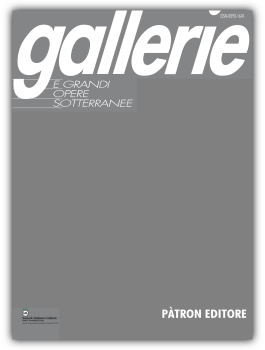 1. Introduction The double-tube tunnel named Serra dell’ Ospedale, which is currently being excavated is part of the renewal works of the motorway A3 Salerno - Reggio Calabria, was built in the 60s. It will substitute the present tunnel, which is greatly compromised because of the poor characteristics of both the ground and the concrete. It is also too narrow for the expected flow of traffic. The shape of both new tunnels is polycentric with the road platform of 11.20 m which includes two lanes and an emergency lane. The overburden is about a thousand metres. 2. Characteristics of the crossed soils The geology is very heterogeneous. Sediments of marine origin that were deposited between the Upper Pliocene and Lower Pliocene ages outcrop in the area. They are covered by thin layers of alluvial or debris type deposits and the figure 2 explain better the chaotically situation of the geology encountered at the excavation face. The reconstructed stratigraphic sequence shows a rather chaotic non homogeneous succession of layers that do not identify a precise order of correlation between the various formations encountered (Figure 3). It was possible to identify at least four different types of ground layers in the Sand Complex. It is necessary to point out the behaviour of the different lithotypes encountered at the face, in particular: - the sands show a rather different behaviour, even in the presence of a similar granulometrical mixture. These sands, if present at the face in lenses in the clayely-silt, constitute a somewhat precarious support foundation of the clayey layers; - sands with silty intercalations, have an unpredictable behaviour, basically because of the saturation degree of these silty levels; - the silt, shows good holding characteristics and offers a certain tranquillity from an operative point of view; - moreover the silty-clayey soil has a role that is connected to the deformability of the excavation face. This situation is made worse by the particular and unforeseeable behaviour of the water infiltrations at the face. The sandy layers are related to the possible water infiltrations, to the fluid properties of the sands, and to the injection difficulties due to the poor permeability and the limited self supporting properties of the consolidation boreholes: all of this basically makes it impossible to intervene with classical consolidation intervention systems. Therefore the first excavation sites were treated as “laboratories”, with the intention of optimising both the consolidation interventions on the face and on the tunnel back and, at the same time, to choose the most suitable and flexible injection mixture in to difficult and varied “geo” context. 3. New ground consolidation and reinforcement technologies The operations at the excavation faces showed that the conventionally designed consolidation and reinforcement operations were not able to produce the expected results in terms of tunnel stabilization. It was observed in particular (Figure 4): – sudden and unpredictable spallings of the face; – the consequent collapse of the inadequately supported pieces of cohesive layers; – repeated collapses, because of the flow of sand between the umbrella pipes, with chimneys, some of which reached the ground level. The anomalous behaviour of the ground made it necessary to adapt the consolidation and excavation techniques to the real geological and geotechnical situation of the sites and to “experiment” new tunnel stabilisation systems. For example the introduction of fully grouted fibre-glass pipes into the ground requires that the specifically drilled boreholes are stable and this was a huge problem for our excavated face. Moreover the fibre-glass slabs were folded and crushed by the weight of the clayey ground layers. The novelty of the method presented here, lies in the fact that all the pipes on the back and at the face are self-drilling steel pipes with cement mortar injections. The consolidation works at the excavation face are show in figure 5. The self-drilling system with cement mortar injections is not affected by any instability of the boreholes and it avoid the previous drilling operations, like the extraction of the drilling rod, the introduction of the pipe into the borehole and cementing of the pipe processes. All of this is reduced to a single drilling operation, which results in a considerable saving of time. Robust load-bearing pipes with a diameter of about 110.6 mm and a thickness of 8 mm are used at the back, instead smaller pipes are used at the face with a diameter of 60.3 mm of the same thickness (figure 6). When evaluating the results of the self drilling mixtures during the advancement phases, the better capacity to be injected and the ductility of the type B mixture was immediately noted as it obtained good results in both the sand complex and in the clay complex. The type B mixture is made up of 350 kg of CEM 111/A cement, 32.5 kg of swelling mortar and 300 litres of water with 1 % super-fluidifying additive. The optimal injection pressure has proved to be of a value of 200 bar; because it was evident that more pressure caused remarkable re-flow phenomena, not only occurred in adjacent boreholes, but also in relatively distant boreholes. The volume dealt with in the sand complex reached values between 30 and 45 cm around the borehole according to the degree of cementation and stiffness (Figure 7). In figure 8 we can observe the ground reinforcement and stabilization system: the self drilling steel pipes jet grouted with swelling cement mortar that made up the “umbrella” on the back face and the selfdrilling steel pipes grouted with cement mortar at the face. The excavation was carried out with scraper-excavating machines, the face consolidation self-drilling pipes were first bent and then cut with robust scissors (figure 9). The folded steel pipes section are recovered as scrap (figure 10). The spoil is no longer polluted by fragments of fiber glass and plastic injection pipes. For the excavation length of 6 m a total of 198 hours per cycle were used, the time necessary to carry out the consolidation intervention of a typical site made up of including all the working stages, can on average be considered equal to 120 hours, that is more or less 5 days (Table 1).

Callaria Carlo, Pellizza Sebastiano - The role of 19th century tunnelling engineering in binding Italy to Europe and bridging the gap between the north and south of a new state